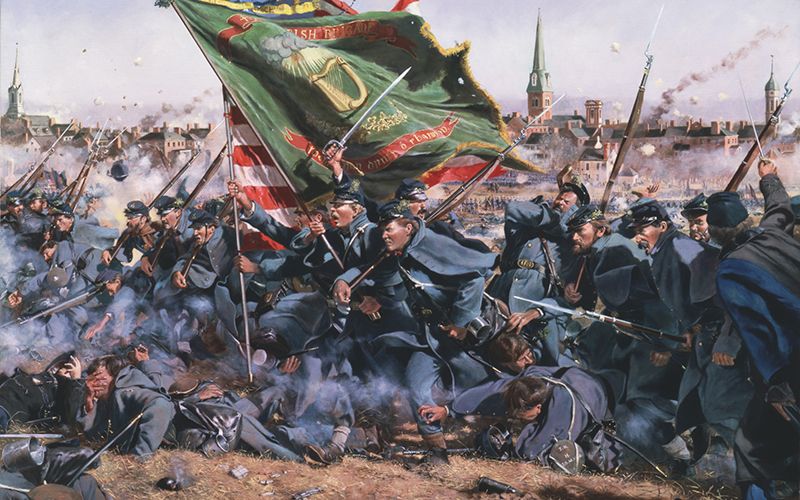 The heroics of the 69th Irish brigade at the Battle of Frederickburg have gone down in the annals of Irish American history. For many, this bloody battle during the American Civil war was the moment when Irish immigrants to the US finally received some level of acceptance in their new country.

No longer could disloyal papist slurs be bandied about when referencing the Irish. The Irish had proven their loyalty to their new country by the blood that they had shed on the fields of Fredericksburg.

At the start of the Battle, the 69th Irish Brigade was made up of 1600 men but by the end of the days engagement only 256 men remained standing. The appalling attrition rate is evidence of a number of things (1). The reckless bravery of the 69th (2). The utter incompetence of the US military leadership.

Whilst needless deaths did occur, the bravery and heroics of the 69th on that faithful day is beyond question.  Commenting on the 69th the legendary Confederate commander General Robert E. Lee said,

“Never were men so brave. They ennobled their race by their splendid gallantry on that desperate occasion.

So who where the 69th Irish brigade and who led them? 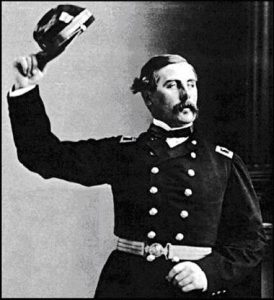 By any standard Thomas Francis Meagher led an extraordinary life. He was a leader of a failed rebellion in Ireland in 1848 and for his so called crimes he was banished to the remote and inhospitable Van Diemens land.

For most Irish convicts once they had arrived on the island that was it, there was no way off, but Thomas Francis Meagher was made of far sterner stuff that your average man, as he proceeded to bust out of captivity and sail all the way across the oceans of the world to the United States.

When the civil war was in its infancy Meagher saw a path in which newly arrived Irish immigrants could be accepted by their new country and this path was by proving their loyalty across the battlefields of the civil war. Mostly because of Meaghers influence the Irish Brigade was set up.

The brigade quickly began to distinguish themselves across the battlefields of the American Civil war. But it was to be the Battle of Frederickburg and in particular the Brigades assault on  Maryes Heights that the 69th  would be remembered for. 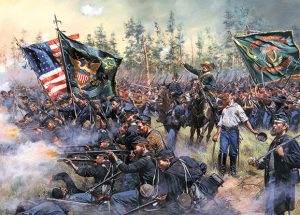 On the 13th of December 1862 the 69th Irish brigade fell in line beside the banks of the Rappahannock River. Brigader General Thomas Francis Meagher had overall command of the brigade. The brigade also comprised of the 63rd, 69th and 28th Massachusettes and New York regiments and the 116th Pennsylvania regiments. These regiments almost exclusively comprised of Irish immigrants.

General Ambrose Burnside had ordered suicidal full frontal assaults against Robert E Lee’s confederates who were positioned behind a stone wall at Maryes Heights. A number of attacks had failed when Burnside turned to the Irish Brigade to try and break the deadlock.

When Meagher was given the order to prepare for attack he ordered his men to put sprigs of evergreen on their caps so that they could be distinguished as being from the 69th. Meagher was dressed in a distinctive green suit which further impressed on those witnessing that this was going to be an Irish military operation.

When the soldiers of the brigade starting cheering and hollering the Gaelic saying, “faugh a bellagh” (clear the way) the men began to advance up the hill. As the 69th made their way up the across the bodies of the dead and the dieing waiting for them behind the wall was Col Robert McMillans Georgia Brigade which was a Confederate Brigade which also comprised of mostly Irishmen.

When Confederate General Robert E. Lee saw that his Irish contingent would have to shoot down their fellow countrymen he ordered reinforcements in case the Irishmen in his ranks wilted under the emotional pressure of having to shoot down their fellow brothers. But Lee need not have worried as his Confederate Irish brigade, in spite of conflicting emotions, were about to unleash hell upon the 69th.

The 69th Brigade made their way towards the stone wall at double quick pace as showers of musket and cannister shot rained down upon them. One eye witnessed noted how the 69th had a “half laughing, half murderous look in their eyes” as they advanced up the hill towards their inevitable doom.

Some of Lee’s Irish soldiers had tears in their eyes as they pulled their triggers on their fellow countrymen. But spite of their conflicting emotions, from a Confederate perspective, these soldiers performed their duties to last, raining musket-ball after musket-ball into the brave but hapless 69th Irish Brigade.

The men began to fall like domino’s as wave after wave red hot fire cut right through their ranks. But still the 69th marched on. Eyewitnesses were taken aback at the near suicidal bravery of the Irish Brigade.

Confederate General Pickett said of the attack, “The brilliant assault on Marye’s Heights of their Irish Brigade was beyond description. … We forgot they were fighting us, and cheer after cheer at their fearlessness went up all along our lines.”

The Brigade made it to within a few feet of the wall but they were eventually, for the first time in their history, forced to retreat during a battle.  The relentless and murderous confederate gunfire had proved too much.One eye witnesses stated “Nothing could advance further and live.” 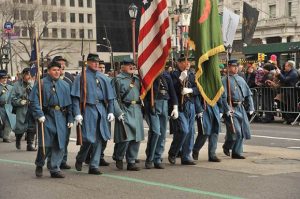 The Irish Brigade’s bravery at Fredericksburg received a great deal of international attention, The London Times correspondent wrote, “Never at Fontenoy, Albuera, or at Waterloo was more undaunted courage displayed by the sons of Erin than during those six frantic dashes which they directed against the almost impregnable positions of their foe.”

When news of the mammoth casualties suffered by the 69th began to leak through, amongst the Irish community, the initial reaction was one of horror. For many, The attrition rate was further proof that the US authorities would needlessly sacrifice Irish lives. Over time, it seems, that scribes have romanticized the wanton destruction and needless deaths that were caused, but such is the nature of war.

In spite of it being obvious that the capture of Myers Heights would have been an impossibility, Burnside insisted on the pig headed full frontal assault upon an impregnable position, his actions undoubtedly caused many needless deaths. But his negligence wasn’t just limited to the 69th , with the entire Union Army suffering vast casualties, so I think its a bit wide of the mark to suggest that Burnside singled out the 69th for special treatment.

The heroism of the 69th was the day that the Irish finally began to be accepted by sections of the American establishment. Tales of the brigades exploits abounded in local media sources who lavished praise on the sacrifice of the men. From Generals like Robert E. Lee to senior sources in the media, to the wider public at large, the 69th’s sacrifice would endure not only in that era but would endure right through the annals of history.