Claddagh rings are etched into the annals of Irish history, these iconic rings are associated with romance, loyalty, love and friendship. The rings which are designed with two hands holding aloft a crown heart are widely recognised as being a symbol of Ireland and enduring love. Nowadays, these rings are widely used as fashion accessories and also as a symbolic gesture.

What do they mean? 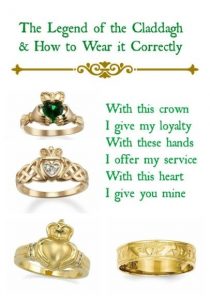 The two hands represent friendship, the heart means love, and the crown represents loyalty. The earliest known record of anyone using one of these rings dates back to the 1700’s to the Irish village of Claddagh.

The Claddagh ring is a fine example of a much broader category of rings known as faith rings or fede rings. The Italian word fede means “hands joined in fidelity.” Similar to to other variants of the ring, wearing a Claddagh ring is synonymous with with love or friendship.

The history of similar rings 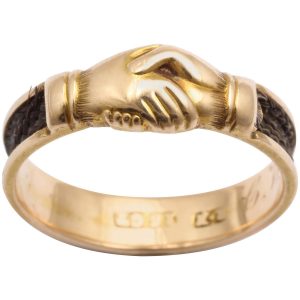 The power, symbolism, and magnetism of rings goes back to the era of the ancient Egyptians who considered a circular object as being a powerful symbol deserving of reverence. The circle represented eternal life and love, and an opening carved into the circle would represent a passageway into an unknown realm or world.

It appears to have been the Romans who first introduced rings as symbols of love and friendship. The most well known ring was the fede ring, which similar to the Claddagh ring, had two hands clasped together. These fede rings were extremely popular and widely used during the Middle Ages and throughout Europe.

The widespread consensus is that the Claddagh ring originated in the small Galway village of Claddagh around the 1700s but there is much dispute as to who first made it and why they made it.

Where it all began? 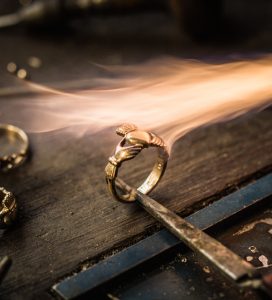 One legend says that an Eagle dropped a fully completed Claddagh ring straight into the lap of a woman to reward her for her hard work, generosity, and loyalty.

Another tale suggests that the origin of the ring was when a poor commoner fell in love with a wealthy lady and to prove his love to her and to her father he designed and created the Claddagh ring.

But it is the story of Richard Joyce that is most commonly associated with the Claddagh ring. Richard was a fisherman from Galway who had fallen in love with a local woman named Margaret and one day when Richard was out fishing he and his crew were captured and taken prisoner by a gang of ruthless Spanish Pirates.

During his captivity Richard grew distraught because he was going to be deprived of the woman that he loved. Eventually Richard was sold as a slave to a Spanish Goldsmith who began teaching him the trade.

To keep his spirits, alive each day, Richard would steal a small speck of gold and as the years passed by in captivity he was able to design a gold ring. His greatest dream was that one day that he might escape from his prison and present the ring to his long lost love.

In the meantime, a powerful allay of King William III heard that his fellow Christians were being held as slaves and he ordered all of these slaves to be released. When Richard was released he returned to Galway and presented his ring to his long lost love Margaret who willingly accepted him back into her arms.

Over the years Claddagh rings gained in popularity and began to be used as wedding rings in the wider Galway area. The rings also began to be associated with poor fishing families along the Galway coast who used the rings as investments.The rings were used as family heirlooms getting passed down from generation to generation.

One thing is for sure, that the popularity of these iconic Irish rings seems set to continue unabated.

Check out this great handyman limerick blog for all your limerick handyman needs.