Situated on the island of Boa in County Fermanagh stands some of the most remarkable and mysterious stone figures in Ireland or Europe. These bizarre statutes hark back to an era of Paganism, sacrifice, and a whole host of other activities.So what exactly are these enigmatic figures that have the power to captivate the imagination? 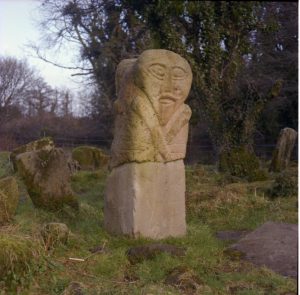 It is widely believed that these structures date from an early Christian period, perhaps from around(400-800AD).One of these figures is widely referred to as a Janus figure and this is because it has a head on either side of it.

The figure is 73cm in height and 45cm wide. Whilst the figure is reminiscent of the two headed Roman diety known as a Janus, but in spite of this resemblance, the general consensus is that the figure is not a Roman Janus.

It is believed that the figure represents a Celtic god or goddess. Some people reckon that the head represents the Goddess Babhbha who was the Celtic God of war and fertility. What supports this theory is that BOA island is named after Badhbh the Celtic goddess of war.

More evidence that supports this theory is that people of that era had no reading or writing skills but because of this lack of literacy they had phenomenal memory power, and consequently, could easily pass stories and place names down from generation to generation without the story ever changing or deviating too much.

Each side of this mysterious figure has an intricately carved face and a torso. Where the two separate faces are joined there is an interlace design that may represent hair joined as one. The faces are large, pointy, with straight noses and small mouths from which protrudes pointy chins.

Bizarrely, the figure has no neck with the head directly on its torso. There originally was another part to the figure which encompassed long fingers carved into the rock but this part of the structure broke away.

This section was recently discovered buried in the ground nearby. The east side of the figure faces sunrise and the bearded figure that is engraved within seems to be speaking. 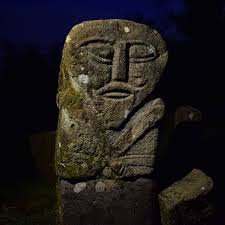 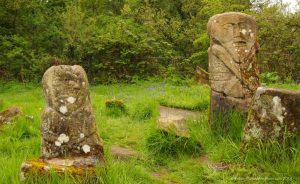 The second figure that is located at Boa was originally found at Lustymore Island but it was then relocated to Boa. Known as “The Lustyman” it was brought to Boa Island in 1939.

This figure measures in at 70cm in height and it has been extremely worn down by rain, weather and time. Some people believe that due to the deteriorated condition of “The lustyman” that the figure actually pre-dates the Janus.

Some of the theories that revolve around the structure the mythical woman Sheela na Gigs who was said to ward of evil spirits. These figures were usually placed outside homes or place of worship so to ward of any evil spirits from entering.

Relevance to the modern era? 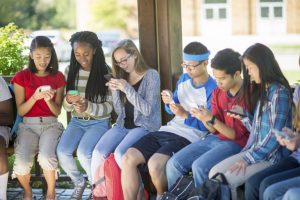 Perhaps in the modern world we have more in common with our pagan ancestors than we might like to think as we worship the gods of money and digital devices. As soon as we arise in the morning we bow down and genuflect in front of our TV’s, Laptops, and Ipads, and Iphones.

At least the ancient Irish only spent a few moments worshipping their Boa Statutes and then got on with the rest of their day, but nowadays, many people spend the entire day prostrate paying homage to their mobile phone.

The ancients might have saw visions of their gods and goddesses in the clouds but the image the modern man might see in the clouds would be the apparition of a mobile phone followed by a rumble of noise which would announce, “tweet, tweet, tweet, ding, ding….” Perhaps, in many ways we have managed to out-pagan the pagans?

Overall, I think that these figures at Boa Island are some of the most remarkable figures in Ireland. They truly have an ability to captivate the imagination.

Imagine the time, effort, and craftsmanship that it would have taken to carve these figures out of a huge solid block of rock. The makers of these enchanting structures must have laboured and laboured night and day to try and perfect the engravings.

The fact that the figures have managed to survive thousands of years is another testament to their enduring power. These figures meant something. They became a focal point for the communities of that era. Gatherings would have taken place at these statues.

What time of gatherings? Who knows? Many as the sun rose of set each day people would congregate at these locations to welcome the coming light of day or to ward of the spirits of the approaching night as the sun dipped into its sleep.

Maybe it was an attempt to try and put a face to some of the figures and spirits that the Celts or ancient Irish felt were all around them? Perhaps, these images could have been reflective of some common dream?

Maybe as the night approached the people would try and evoke whatever powers they felt the statutes had to try and protect the tribe? Remember this was an era were death would have been constant, people weren’t expected to survive too long.

We will never really know what these strange and unusual statutes stood for but that doesn’t stop us from guessing.

I’ll leave the last words to the great poet Seamus Heaney who was inspired to write a poem when he visited Boa Island and laid eyes on the statutes.

Then I found a two faced stone

In the wet gap of the year,

I faltered near his power —-

Who broke the water, the hymen

With his great antlers —-

There reigned upon each ghost tine

The mothering earth, the stones

Taken by each wave,

The fleshy aftergrass, the bones

Subsoil in each grave.