Skip to content
Nestled amidst the rolling drumlin hills of the border region lies a place called County Monaghan.  We’ve given the world poets, artists, fighters, sportsmen, and much more. A son of Clones, Barry McGuigan, conquered the world of boxing with his fists. Inniskeen man Patrick Kavanagh dipped into his magic chest of words and weaved a spell that captured a nation’s heart.  Tommy Bowe strode around the Rugby pitches of the world like a colossus.
But Monaghan, in spite of its long list of the renowned heroes is almost like Irelands forgotten county. A mere afterthought to our masters in Berlin and Dublin. In the 15th century “The English attorney general, John Davies described the area as ‘the wastest and wildest part of all the north……proudest and most barbarous sect among the Irish’.’ If that was said on a Gaelic football field we’d take it as a compliment. Our football team is led by the illustrious Conor McManus has taken on and beaten the best.  Giants have fallen at our feet. 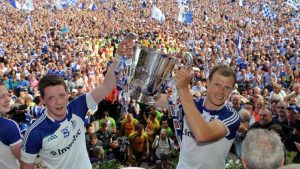 What can beat a game of Gaelic football in Clones, the atmosphere, the craic, the camaraderie, the pints?  Barcelona has the Nou Camp and we have Saint Tiernachs park. We wouldn’t have it any other way.  This is our Coliseum. Our gladiators battle it out upon this hallowed turf. We are the 3rd smallest county in Ireland, but that doesn’t matter, fuck the odds. We’ve beaten them all Kerry, Dublin, Tyrone, they’ve all fallen on their shields. Sometimes David really does slay Goliath. Other times bleak dark days are the only things that we can see on the horizon, but there’s always a glimmer of light. We come back. We rise again. It’s in our nature.
During the troubles, Monaghan was seperated from our natural cousins to the north in Armagh. We were always a place apart. A never-never land synonymous with mushrooms, diesel smuggling, cows, dung, lakes and shite weather.  If Monaghan was an island, one suspects our government would have cut us off a long time ago to drift aimlessly amidst wild Atlantic currents. No one wants it. Not that place. Let it drift, let it drift.
But who cares what them shysters in Dublin think of our “thick-tongued mumble” and what about it if our own great bard also said, “oh stoney grey soil of Monaghan you burgled my bank of youth.”  If Kavanagh was around nowadays he would have seen other banks burgled throughout Monaghan and further afield, but not by the usual suspects, but by men in black suits and ties speaking in posh west brit Dublin accents.
To hell with the jackeens, they can have their concrete Jungle and zombified junkies roaming the streets like a scene from the dawn of the dead.  In Monaghan, we have golf courses, clay pigeon shooting, fishing, beautiful scenery, rivers, lakes, clean air, castles, houses you can actually live in, and men that drink pints to bate the band. In Carrickmacross, you’d be more likely to get your hands on a pint of beer than a loaf of bread. The towns 19 pubs are a testament to this fact.
But Carrickmacross has much more to it than pubs with the location being the burial place, in Bullys Acre, of the Blind Harper Patrick Byrne who enchanted the royall halls and palaces of British Aristocracy in the 19th century.  There’s also Magheross graveyard which comes complete with a macabre crossbones and skull headstone.
The old Famine Workhouse has recently been renovated and provides regular tours of the old famine graveyard and surrounding areas. The Artist Sting recently visited the place in an effort to discover his heritage. Carrickmacross is also the home of the world-famous Carrickmacross Lace which has graced the weddings of Princess Diane and Kate Middleton. 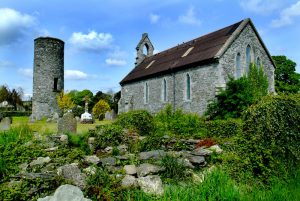 A Monaghan man is usually a mixture of spiteful sneery ill-humour and sometimes fun and craic. If we didn’t know a story about you he’d be sure to make one up. The bigger the lie the better and it will be sure to travel like a wild gorse bushfire that’s after being sprayed with gallons worth of petrol. Goodnews reaches a blind alley. Bad news will stampede around the place like a wild rampaging Elephant.  Who said Monaghan was a paradise? Not me, but sure what place is?
And what better place to die than in Monaghan as soon as someone passes on the masses turn out in their thousands to “pay their respects.” In Dublin, you’d be pumped up the Chimney in clouds of smoke before your body even got a chance to get cold. And so what if the same locals turning up at your funeral probably wouldn’t have “pissed on you if you were on fire” if they met you on the street the week before you died. At least the pretence is there. Throw a dead dog a bone and all of that. A great place for a dead man.
To the west lies our mortal enemies Cavan.  The relationship is akin to a North Korea South Korea standoff, with the men from Cavan refusing to budge when it comes to handing over them few extra pennies. They’ve been known to go on hunger strike over the rights to 2 cents that was found lieing on the footpath.  There’s always been hard borders between Monaghan and Cavan. But we’ll lay claim to Du Na Ri forest park as our own. If USA can claim Texas, we’ll claim Du Na Ri. Power grab.
As we’ve already seen we’ve excelled on the world stage!  Did you know an infamous cannibal came from Clones? Yes, In the 19th-century Clones man Alexander Pearce was banished to Van Diemens Land where he eventually ended up eating his fellow convicts for lunch, dinner, and breakfast! Charming eh?  What can we say, sure don’t we all like a good Snack Box after a night out?
Monaghan is packed full of history, stories and laughter. To the west, at the top of the Bragan Mountains, a local Celtic Chieftain is reputed to have been buried,  keeping an eternal watch over his ancient Kingdom of Farney.
Near Glaslough stands Castle Leslie an 18th Century Castle that is steeped in history and a place that apparently has a ghost roaming around the rooms at night.  The Beatles Paul McCartney was married there before embarking on his doomed romance to Heather Mills. 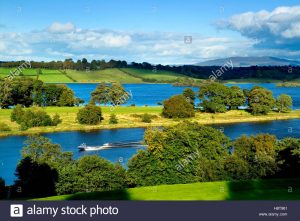 In Castleblayney there’s the abandoned relic of Hope Castle which overlooks the stunning Muckno Lake. Monaghan is dotted with hundreds of little hidden lakes that populate nearly every nook and cranny of the countryside. The beauty of Monaghan is that you could suddenly stumble upon one of these lakes glistening and winking in the distance tempting you into her arms. These lakes are packed full of some of the best course fish in Ireland and people travel from all over to fish them. In the depths of the Drumlin belt, there’s always a monster lurking around the next corner.
In Inniskeen a Round Tower and the Patrick Kavanagh heritage centre awaits you. The Fane River flows through the village providing a relaxing backdrop for any visitor to the area.
Only a few miles away you have Laragh Tin Church, a striking 19th-century church made out of tin, the only one of its kind in Ireland.
In Monaghan, not only do we have great architecture we also are the Kings when it comes to Bog Snorkelling.  The Bog Snorkelling All Ireland Championships takes places every year In Doohamlet.  Monaghan might not win an all Ireland football title any time soon but when it comes to Bog snorkelling we are the champions. Bring it on. 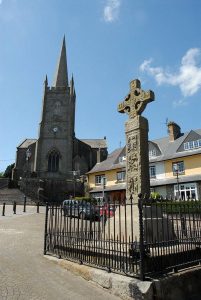 In the northern reaches of the county there’s situated the small town of Clones, the setting for Patrick McCabe’s novel turned movie The Butcher Boy. Clones seems like a town that is stuck in a time warp, a place that has never made it past the 1960s. Derelict buildings crumble onto the footpaths, abandoned shops and dreams lie scattered all over the streets.  If you turned on the TV in Clones you’d nearly expect to find the TV Show Dallas on repeat.
But appearances can be deceptive because from this seemingly innocuous border town has given birth to men of the caliber of Barry McGuigan, Patrick McCabe, Eugene McCabe, Joseph Finnegan, and many more.  Clones also has an ancient 10th Century Celtic cross right in the center of the town and lets not forget  the magnificent 12th Century Round Tower built by local Monks in an attempt to hide their wealth from raiders. But for us GAA fans all  we really care about is that Saint Tiernachs Park remains standing  and that the towns multiple bars are fit to serve hard liquor during the run-up to matches. We’ll drink to that.
I was once told by a man that only good thing about Monaghan is the road out of it and sure maybe he was right but then again maybe he was talking through his arse. For us locals, the place keeps us come back for more and more. What else can I say? but leave the rest to the immortal Patrick Kavanagh, “I saw the danger yet I walked along the enchanted way,” Yes, these wild Drumlin hills have a romance and magic of their own.
This article was compiled by Seamus Hanratty who owns and manages a content writing website and a copywriting website.