The Jumping Church, The alcohol treatment center, Mellifont Abbey, and the Monasterboice Cross

Setting off to visit a place called the “Jumping church” might sound bizarre. A Jumping church might be something someone would see after eating a bucketful of magic mushrooms but alas, “The Jumping Church” is a real place, and apparently, according to legend, it really is a jumping church. The site is situated just outside Ardee in a townland called Milockstown. I parked at the side and hopped across the fence and there before me lay the infamous building.

Bizarrely, a huge portion of the bottom area of the foundation the bricks are positioned at an angle that does appear to suggest that the church did actually do some kind of jumping. Certainly, some kind of structural damage did occur at the site. There are two local legends that proport to explain the anomaly 1. That the Church was lifted from its foundations during a great storm in the 1700’s and, 2. That when some man, whom had been excommunicated by the church, was buried inside the grounds of the structure and that the church registered its disapproval by jumping away so that this man wouldn’t be buried inside sacred ground.

A plaque on the site reads: “This wall by its pitch, tilt and position can be seen to have moved three feet from its foundation. Contemporary accounts mention a severe storm in 1715 when the wall was lifted and deposited as it now stands but local tradition states that the wall jumped inwards to exclude the grave of an excommunicated person.”

My theory is that maybe the bricks were laid down by some bricklayer who had consumed too much poitin. In fairness, maybe the church was right to jump out of the way- there are a few bastards in my own home town where the church would be well advised to do a bit of skipping and jumping.

The jumping church also has a connection to the the Knights Templar who had a base at the location during the 13th century. Over the years the Templars been associated with the holy grail, the ark of the covenant and loads of other conspiracy theories. But isn’t it remarkable to think that this infamous organisation resided and lived here in small little townland in County Louth.

After I was finished visiting The Jumping Church I then decided that I would go visit Mellifont Abbey an 11th century Monastery that was built by Cisteran Monks. As I was driving up the road to Mellifont I saw a signpost for a place called Smarmore Castle so I decided to turn back and pay this previously unheard of place a quick visit.

As I drove up to the Castle gates there was a large sign saying “No entry.” The gates were wide open so I decided to ignore the sign and drive on in for a quick nosey. It quickly became apparent that this place was no ordinary castle when I spotted another sign emblazoned on the front of the castle which read, “Alcohol treatment centre”. Almost immediately Images began flooding into my mind of a pack of drink starved alcoholics flocking around my car like a pack of zombies demanding that I supply them with some hard liquor. Before this imaginary mob descended on me I put the boot down and left Smarmore Castle and drove towards for Mellifont Abbey.

The Abbey was founded in 1142 and continued to be a functioning Monastery until 1539 when King Henry VIII confiscated the land on behalf of the English crown.

Mostly all that is left of the site now is some ruins, but you can still make out that at some stage that there would have been a significant settlement located there. I also learned that on the night before the Battle of the Boyne many of King Williams officers stayed in the Abbey.

An interesting side story to the Battle was that on the day before the momentous encounter a few hundred of King James soldiers went on a massive siege of drink and couldn’t be awoken from their drunken slumber to take part in the fight! Allegedly, the Poitin that they were drinking was nearly twice as strong as there normal brand and so during the most pivotal battle in Irish history these soldiers spent it trying to shake themselves out of a drunken stupor. 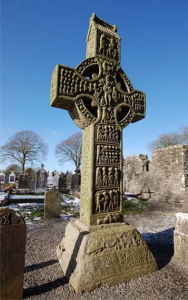 After visiting Mellifont I then decided that I would visit the Monasterboice Celtic cross which is located only a few miles away. The Monatersboice Cross is one of the most iconic crosses in Ireland. Its image has graced everything from flags, stamps, T-shirts, bodily tattoos, necklaces, and much more.

After visiting Mellifont I then decided that I would visit the Monasterboice Celtic cross which is located only a few miles away. The Monatersboice Cross is one of the most iconic crosses in Ireland. Its image has graced everything from flags, stamps, T-shirts, bodily tattoos, necklaces, and much more.

One of the reasons that the Monks would have made these crosses was because it allowed to them explain to the illiterate locals the story of Jesus Christ. The cross stands robust and strong and is packed full of intricate little carvings that supposedly tell the tale of Christ. One image that stands out is a engraving of two devils sticking their pitchforks into a person who has found himself in the pits of hell.

This huge 21 foot cross exudes presence and power. The effort that is must have taken to carve out the cross and make it into the magnificent structure that it is must have been monumental.

At the location there also is the Monasterboice round tower, a place that undoubtedly would have witnessed many a tragedy as greedy Viking hordes sought to get their hands on whatever riches where hidden inside the tower. The Vikings would have sailed up the Boyne in their Longships and laid siege to places like this. This was one of the reasons why these large tall towers built so that the monks could climb up into them and hide inside.

The location also has a large graveyard which some headstones giving dates that stretch back hundreds of years. In a hectic world of hustle and bustle, there is a strange peacefulness to a graveyard.

I always find that in a graveyard by reading some of the headstones that there’s always a story to be learned, a lesson to be learned, wisdom to be gained. In old graveyards like this, which stretch back centuries, what sometimes catches my eye are the new graves and at Monasterboice one particular plot of a young man in his late teens caught my attention. His grave was covered in tributes, including the touching tribute of a football.

Curiosity got the better of me and I decided to Google his name where I quickly came upon a news article that told his tragic story. The kid had been going to celebrate a birthday when he was trying to cross the road and was hit by a car. What strikes me time and time again is the cold-hearted, indifferent, ruthlessness of the game of life.

One minute the lad was walking across the road towards a party, with his whole life ln front of him, and the next minute he was dead. In the end, there are no prisoners taken. There never are. Such is life. Now the boy rests in the cold wet clay of Monasterboice with his ancestors and his ancestors before him and so the story goes on and on. But here at Monasterboice, in spite of all the tragedies, the sun still shines down illuminating the gravestones with a heavenly glow. The birds still sing their songs of hope. The green fields and trees wave, flutter, and twinkle in the wind. The world goes on.

This article was written by an SEO Ireland writer and SEO expert Seamus Hanratty.