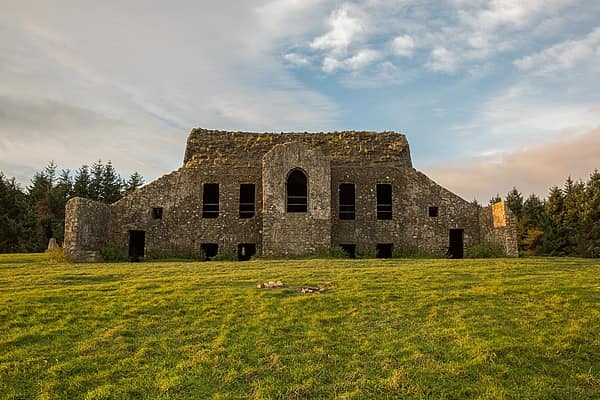 DUBLINTIMEMACHINE:
The Hellfire Club on Montpelier Hill in the Dublin Mountains, is a building shrouded in mystery. It was built in 1725 as a hunting lodge, using stone stolen from a nearby ancient neolithic tomb.
It became home to the Dublin branch of the notorious ‘Hellfire Club’, a London-based hedonistic fraternity for English ” gentlemen”. William Connolly, an Irish Parliamentary Speaker founded the Montpelier Hill site as a lonely hunting lodge in 1725 but didn’t live long enough to have much craic there. After his death, the original roof mysteriously blew off…
When Connolly’s widow leased the spooky stone hideout to a high-ranking member of the Hellfire Club, the Earl of Rosse in 1735, supernatural rumours about the building’s ancient spirits and satanic antics began to spread. The lodge quickly became associated with sex, blasphemy, and the worship of Satan.
Despite rumours of demonic summoning, child sacrifice, and ritual cannibalism, it’s far more likely these bacchanalian aristocrats were indulging in childish pantomimes of Satanism, complete with funny costumes, and a little homoerotic horseplay. Good clean fun!
When it burned down for the last time, rumour had it the source of the blaze was a member, Lord Santry, burning a dwarf servant alive in a ritual gone wrong. It was then abandoned.
Arguably more dangerous clientele than faux-Satanists moved in to the ruined site in the 20th century when it became a hangout for criminals and drug abusers. It’s still wise to visit this well-maintained archaeological site in company and by daylight!