(c) a Rob Buchnana- DUBLINTIMEMACHINE:
Sometimes things which look modern and ordinary are actually ancient. Saint Winifred’s well on Eustace Street in Temple Bar is one such fascinating feature. This overlooked diamond amid the cigarette butt and vomit-smeared cobblestones tells a tale for those with eyes and ears for history. This humble hole, fringed with a little stone wall, lies outside what is currently The Norseman pub. It was buried for centuries before its rediscovery during roadworks in the mid-1990s.

A pint of porter wasn’t the original holy water?

Wells, and holy wells specifically, have a deep and timeless importance to the Irish. Water sources named after saints, like the Welsh Winifred, represent life and hope, both physically and spiritually. They are places where communities came together to draw water and worship. Dublin and North Wales were linked by prosperous trade routes since the 11th century, which may account for the naming. The location would imply its lifegiving liquid is drawn from the subterranean River Poddle or perhaps a shelf of groundwater.

The  deep history of the Norseman pub

It’s amazing this centuries-old feature was lost for so long, considering how this little street corner has seen frequent changes in modern times. Highly debatable official records claim a tavern on the site since 1696. But from the 20th century at least, the nearby pub started as The Wooden Man, then became The Norseman, then J.J.O’Neill’s, Monk’s, Farrington’s, and now once again is called The Norseman.

As the criminally expensive pubs came and went the secret freshwater feature was rediscovered, partially restored, and seemingly forgotten once again. The only liquids unneglected in that neighbourhood being of the alcoholic and extortionately overpriced variety. Sadly, in keeping with the general drunken, disrespectful littering in this tourist trap part of town, the medieval miracle is treated like a rubbish bin.
Next time you stagger past, hopefully en-route to a pub whose prices dont require remortgaging your gaff, spare a thought for Saint Winifred and her waters which quenched our ancestors’ thirst, body and soul.

Drimnagh Castle was built approx.1216 by Sir Hugh de Bernival. It is the only remaining castle in Ireland with a flooded Norman moat. The reputedly haunted location boasts a 15th-century great hall and a 16th-century tower. The castle stayed in the same family for centuries till it was sold to a dairy farmer in the 1900s when its first restoration was attempted. It stayed in his family till it was sold to the Christian Brothers in 1953 who built a school on the land. It fell into ruin again and risked demolition in the 1970s till it was partially taken over by An Caisleán GAA who restored the coach house. In 1986 artist Peter Pearson and a local committee got FÁS to restore it and the adjoining 17th-century garden to its former glory. The venue, which was featured in The Tudors, can be hired as a wedding and party venue. Ghosts are not included in the bill!

Mysterious Puck’s Castle is an easily overlooked, overgrown ruin in a cow field in Dun Laoghaire-Rathdown. What it lacks in size it makes up for in mythology. “Púca” as Gaeilge means a spirit and this name was anglicised to Puck, denoting the possible haunted history of the little citadel. Built around the early 16th century, legend says it was constructed using cursed materials stolen from a nearby ancient magical ringfort called “Bearna Dhearg”. To defend “The Pale” it was not unusual then to cannibalize sacred Celtic sites for stone, no matter how severe the curses were. A more recent, and sadly verified, story occurred in 1867. An English girl who lived locally, called Jane Eleanor Sherrard, vanished whilst picking wildflowers near the castle, never to be seen again. In this case, it seems some monsters are sadly all too human!

Tinsel Castle in Finglas is located on private land near the end of a runway, at Dublin airport. The four-storey medieval tower house was built in 1450 and its 500-year-old roof is the last surviving original wooden roof on an Irish castle. The same family lived there for centuries until it was abandoned in the 1870s. It contains a haunted chapel dating from 1573, defensive slits in its towers, and a barrel-vaulted ground floor. Saint Oliver Plunkett reported staying there. Dunsoglhy Castle was featured in Braveheart, standing in for Edinburgh Castle home of Robert the Bruce.

800 years of continuous occupation, births deaths, and battles means Malahide Castle is haunted by several spirits, the most famous of which is Puck. He was the creepy Court jester who lived in the turret room. He was notorious for falling in love with female visitors but sadly his affections were never returned. He took his own life but his diminutive apparition is seen about the castle but mainly near Pucks Door in the main hall. There is also the Lady in White, a female spirit who haunts the corridors and gardens. 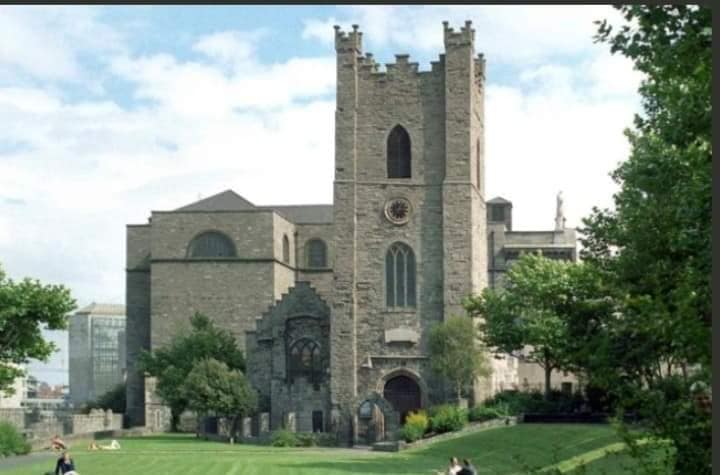 (c) @ DUBLINTIMEMACHINE
Holy magic stones don’t just reside on Father Ted’s Craggy Island. We’ve got one here in Dublin! There has been a place of worship on the site of Old St. Audoen’s church since medieval times.
That even more ancient chapel was for St. Columba. Audoen’s is the oldest surviving medieval church in Dublin with parts of it dating from about 1190 CE. The 17th-century tower contains six bells. Three of these are the oldest in Ireland and date from 1423 CE.
And with centuries of history comes more than a few mysteries. A 9th-century grave marker called ‘The Lucky Stone’ (an chloch ádh) was practically worshipped by the citizens of The Liberties. The granite slab is engraved

with a Greek cross within a double circle. Believers claimed touching or kissing it cured illness and brought good luck.
In 1309 the Lord Mayor, John Le Decer, took the sacred stone from its resting place and reinstalled it up the road in the Cornmarket. He had just built a marble cistern there. It was the first public water fountain in the city and merchants and peasants alike felt the magic rock might enhance the popularity and health effects of Le Decer’s project.
But yet again this rolling stone gathered no moss. It vanished one night from the Cornmarket, only to reappear in Glasnevin Cemetery. It must’ve gotten bored again because its next new home was the historic Whitefriar Street Church. In 1826 it was stolen, possibly by visitors to the city, and was lost for years. The thieves who returned it claimed the object was cursed and became heavier the further from Dublin it was taken.
In the 1840s the Lucky Stone was discovered by a night watchman on a building site in Kilmainham. He claimed it began to glow in the dark and then gradually change into a human shape! When news began to spread, and members of the public began to flock to the site, workers began to tell tales of the stone speaking and screaming and moving of its own accord.
In 1888 the Rev. Dr. Alexander Leeper finally brought it home to Old St. Audoen’s. This time, to hamper any future escape bids, the Lucky Stone was held safely behind iron bars. Leeper was the Rector of the ancient church from 1859-94 and his ghost is said to patrol St. Audoen’s at night to protect the precious stone.
The site has played a role in Irish political life too. Oliver Bond of the United Irishman was elected Churchwarden of the church in 1787. James Napper Tandy, another United Irishman had strong ties to the place. He was born nearby in number 5 Cornmarket and baptised there in 1739. He was also a Churchwarden.
While nobody knows the true origin of the Lucky Stone, the church itself has a definite French Anglo-Norman connection that’s clear in the name. Audoen is the Gaelic spelling of “Ouen”. This ancient place is named after the 7th-century Bishop of R’Ouen, France, who is also the patron saint of Normandy.

DUBLINTIMEMACHINE:
The Hellfire Club on Montpelier Hill in the Dublin Mountains, is a building shrouded in mystery. It was built in 1725 as a hunting lodge, using stone stolen from a nearby ancient neolithic tomb.
It became home to the Dublin branch of the notorious ‘Hellfire Club’, a London-based hedonistic fraternity for English ” gentlemen”. William Connolly, an Irish Parliamentary Speaker founded the Montpelier Hill site as a lonely hunting lodge in 1725 but didn’t live long enough to have much craic there. After his death, the original roof mysteriously blew off…
When Connolly’s widow leased the spooky stone hideout to a high-ranking member of the Hellfire Club, the Earl of Rosse in 1735, supernatural rumours about the building’s ancient spirits and satanic antics began to spread. The lodge quickly became associated with sex, blasphemy, and the worship of Satan.
Despite rumours of demonic summoning, child sacrifice, and ritual cannibalism, it’s far more likely these bacchanalian aristocrats were indulging in childish pantomimes of Satanism, complete with funny costumes, and a little homoerotic horseplay. Good clean fun!
When it burned down for the last time, rumour had it the source of the blaze was a member, Lord Santry, burning a dwarf servant alive in a ritual gone wrong. It was then abandoned.
Arguably more dangerous clientele than faux-Satanists moved in to the ruined site in the 20th century when it became a hangout for criminals and drug abusers. It’s still wise to visit this well-maintained archaeological site in company and by daylight!