The province of Connaught has long been known as the “wild west” of Ireland and one of the most famous rebels who hailed from this untamed part of Ireland was the Pirate Queen known as Grace O Malley. Grace was condemned by the ruling English of the time as “a woman who hath imprudently passed the part of womanhood.

But to the Gaelic Irish Grace O Malley was known as a hero who had beaten the English in many battles that were fought on the high seas. Known as Grainne Mhaol to the natives, her exploits have passed into legend and in the modern era, she has become a symbol and icon of feminism.

A highly educated woman who was fluent in many languages included, French, Spanish, Latin, and English her personal motto was ”Terra Mariq Potens” meaning “powerful by land and sea.” 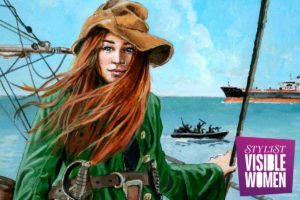 Grace was born around 1530 and was the only daughter of local Chieftain Owen O Malley who ruled much the western coast of Ireland stretching from Achill Island to Innisboffin.

The O Malleys were a powerful family who had amassed a fortune from plundering and pirating from ships that sailed along the west coast.

In order to strengthen their power, the O Malleys had built a number of formidable Castles along the western shoreline which were to serve as bases from which they could launch attacks on any vulnerable looking vessel that held treasure.

When Grace was a young girl she wanted to join her father in one of his seagoing trips but  Graces mother forbade this, saying that she was only a girl,  Grace in defiance of her mother shaved off all of her hair and when her father saw this he relented and allowed her to go on the voyage.

At the age of 15, Grace married Donal O Flaherty who ruled a Kingdom around the Connemara region. It was during this period of her life that she honed and perfected her skills in boarding ships and commandeering their loot.

When Grace was 23, Donal was killed in battle and so Grace extended her empire by inheriting Donals Castle and ships. Soon after she married another warrior and chieftain by the name of the Richard Iron Dick Burke.

Queen of the High Seas 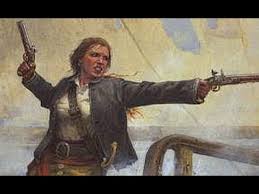 Graces fleet has been credited with taking part in attacks along the entire Irish shoreline all the way from Donegal to the tip of Waterford. Any ships that were foolish enough to sail alongside the Irish shoreline without a vast array of military protections were immediately earmarked for attack by the Pirate Queen who greedily plundered and stole whatever loot she could get her hands on.

One day, Grace gave birth to a child when she was aboard one of her ships.  After the birth Grace retired to bed to recuperate from the stresses of the labor when a gang of Algerian Pirates attacked her Ship, upon hearing of the attack Grace arose from her bed and began to orchestrate a savage counter-attack which turned the tide of the battle. The Algerians quickly sailed away unwilling to risk any more men against the ferocious Irish Sea Queen.

In 1575,  Englishman Lord Henry Sidney visited Connaught and met  Grace O Malley and spoke of having met,  “a most feminine sea captain called Granny Imallye and offered her services onto me…..‘This was a notorious woman in all the coasts of Ireland.”

A short time after having met Lord Sidney, Grace was captured and was imprisoned for a number of years. She was eventually released in 1579 and immediately resumed her pirating activities.

A Captain Martin who was enraged with Grace plundering a large number of his ships launched an attack on Carraighahowley Castle. The Pirate Queen who was besieged in the Castle launched a number of ferocious counter-attacks that forced Captain Martin to withdraw his forces.

Observers at the time stated that,  “Martin was lucky to evade capture himself, so spirited was the defence made by the extraordinary woman.”

A fierce and determined woman who refused to accept against less than 100% during one particular battle she admonished her son for his less than courageous conduct by roaring at him, “Are you trying to hide in my arse, the place you came out of?”

On another occasion when she docked at the fishing village of Howth in order to resupply her crew she approached Howth Castle in the hope of getting some supplies but she was refused as the Lord of the Castle was eating his dinner.

Enraged by this disrespect Grace ordered her army to capture the Lords son and keep him in captivity until the Lord agreed to prepare her dinner and supplies every-time her ships docked in the harbour.

With his son’s life hanging in the balance Lord Howth agreed to this new arrangement. To this very day there is always a spare set seat set for Grace O Malley at Howth Castle.

Visit with the Queen of England 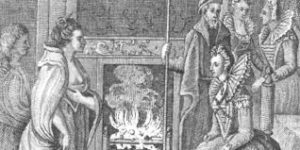 When Sir Richard Bingham began attacking Grace and her band of Pirates Grace decided to take matters into her own hands by traveling over to England to petition Sir Richards boss Queen Elizabeth I. When Grace was finally given her audience with the powerful Queen of England she was asked to bow down before Queen Elizabeth but the defiant Pirate Queen refused to bow as one Queen does not bow to another.

Grace explained that as she was not a subject of the Queen Elizabeth that she would under no circumstances bow. In spite of Graces proud defiance, or maybe because of it, Queen Elizabeth was quite taken with Graces company.

The two ladies began conversing in Latin and came to an aggrement whereby Graces two sons were released from imprisonment and Grace agreed that she would stop attacking and plundering English ships.

The Pirate Queen lived out the rest of her life at Rockfleet Castle, Co Mayo where she died at the ripe old age of 73 of natural causes. According to legend, her head was interned at Clare Island her childhood home. Local folklore has it that her ghostly body sets sails around the west coast in search of her head. 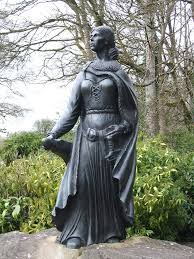 Grace O Malley was a warrior of the high seas, the Pirate Queen, mother, wife, and chieftain whose very name struck fear into the heart of her enemies.

Here was a woman who was ahead of her time, a woman who refused to be curtailed by the prejudices of her era. Whilst the true story of Grace O Malley may never been known, the very fact that her story lives to this very day is a testament to the indomitable courage and power of the woman.

I think I will leave the last words to Grace’s biographer Anne Chamber who wrote that Grace was,  “a fearless leader, by land and by sea, a political pragmatist and politician, a ruthless plunderer, a mercenary, a rebel, a shrewd and able negotiator, the protective matriarch of her family and tribe, a genuine inheritor of the Mother Goddess and Warrior Queen attributes of her remote ancestors. Above all else, she emerges as a woman who broke the mould and thereby played a unique role in history. “