Skip to content
Throughout Ireland, there are hundreds of mysterious rock formations known as Portal Dolmens. For many, these Dolmens take on a supernatural aura with people believing that these structures contain the spirits of our ancestors.
The very name evokes images in the mind of a portal into the next world, the spirit world. For the Celts, that’s what these structures were, a place where the mortal remains of their loved ones were to rest for eternity.
Maybe its the mind playing tricks but when you walk around these locations you can almost sense that something significant happened here many thousands of years ago.
One of the most recognizable features of a Portal Dolmen is the huge capstone, or roof stone, which is wedged in place by a number of smaller stones underneath. The capstone provides a stunning sight for any visitor to one of these places. These Dolmens are known by a diverse array of names: Giants Graves, Cromleachs, Stone Tablets.
In Ireland, these structures have become associated with myths, fairies, legends, and giants. These Dolmens are connected to some of the most legendary figures in Irish history, figures such as Finn McCool and Cuchulainn.
Dolmens are widespread throughout Europe and they are indicative of the Celtic era were the Celts were one of the largest tribes in Europe. Ireland has some of the finest examples of Portal Dolmens not only in Ireland but in Europe too. Usually, Dolmens have an entrance feature, known as the portal, and it was down through this passage where the remains of their loved ones were placed.
Originally, most of these Dolmens would have been covered with masses of smaller stones but in most cases very little remains when it comes to these stones. There are many fine Dolmens that can be seen throughout in Ireland but in the Louth and South Armagh area we are blessed with having some of the finest in Ireland and further afield.
The prevalence of these Dolmens in the South Armagh North Louth area is a testament to the areas deep historical and cultural roots that stretches back into the annals of time.
Evidence 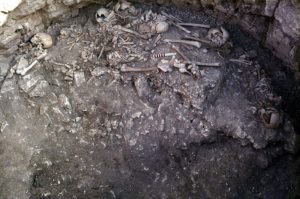 In an archaeological dig of the Poulnabrone Dolmen in County Clare the remains of 33 people where found buried underneath the structure. Carbon dating of the bones suggested that the people buried there all lived between the years of 3800 to 3200 BC. Some of the items found during the dig included a stone axe, jewellery, quartz crystals, weaponry, and pottery.
The testing also revealed that all but one of the adults found at the scene were under the age of 30. There are many theories as to why the people who were buried there died at such a young age.
Historians have speculated that in the Celtic era the practice of ritual sacrifice was pretty widespread and that the sacrifice of a young, fit, and health male would have been seen as an offering that would have been worthy of the god’s approval.
But the evidence gathered from the Poulnabrone Dolmen suggests different, with children’s teeth gathered at the site showing signs of illness and malnutrition.
Other evidence from the site indicates that the people who were buried there had a very physically demanding lifestyle and they were not being fed an adequate diet which would have aided in the recovery from their physical exertions.
Another fascinating discovery was that some of the bones showed evidence of major physical injury.  Two of the bodies had skull and rib cage fractures which had healed over time.  A male hip bone showed evidence of having been pierced by the tip of some projectile and the evidence suggests that this hip bone injury had not healed before the time of death.
A large proportion of the bones showed signs of arthritis in the upper body. Historians are pretty sure that the bodies would have left to decompose in some protected location because there are no signs of animal bite marks on the bones.
A common custom at the time was the practice of “defleshing” where the body was cut of meat and was then burned so as to preserve the corpse from the mutilation by animals.
In humble view, the majority of the bodies found in the tomb in Clare were more than likely warriors who were placed in the tomb in recognition of their valor and bravery in battle.
To these men death in battle is glorious,
And they consider it a crime to bury the body of such a warrior;
For they believe that the soul goes up to the gods in heaven,
If the body is exposed on the field to be devoured by the birds of prey”.
(Silius Italicus (2nd c. AD) Punica 3:340-343)
Ballykeel Dolmen 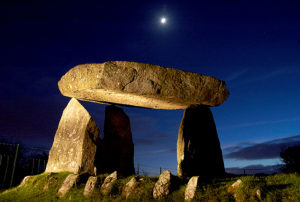 The Ballykeel Dolmen in South Armagh is a fine example of a tripod dolmen. An interesting fact about this Dolmen is that the capstone had originally fallen of the top but it was reerected during excavations in 1965. This capstone is over 3 meters long and it has a peculiar notch on it, which is very similar to other Dolmens which are seen throughout Northern Ireland. 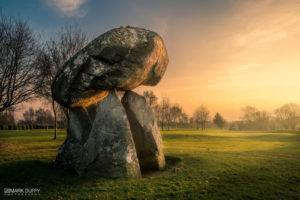 Situated on the grounds of Ballymacscanlon Hotel is the Proleek Dolmen, which dates from around 3000BC.  It is believed that the portal of the tomb, the entrance, points directly towards the nearby Slieve Gullion Mountain and that the tomb is alignment with the setting of the sun during the summer solstice. Legend has it that the massive structure was carried to its location by a Scottish giant. This Scottish giant challenged local Irish warrior king Finn McCool to a one on one duel but unfortunately for the giant Scotsman he was no match for Finn who quickly dispatched the Scotsman to his maker.  Local tradition has it that the Scot is buried in the wedge tomb that is located only a few feet away from the Dolmen. 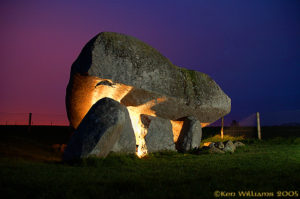 This Dolmen has a capstone which is estimated to weigh over 120 tonnes! The capstone is the largest known Captsone in Ireland.  It’s quite remarkable to comprehend how the Celts, without the help of any mechanical equipment, managed to move such a gigantic stone right up into the air and place it on top of the smaller stones that make up the base of the Dolmen. 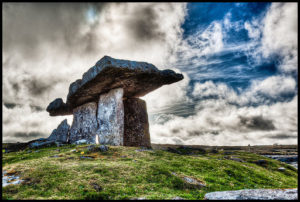 Earlier on in my blog, I wrote about some of the fascinating finds that where discovered at the Poulnabrone. This Dolmen truly is one of the most remarkably preserved Dolmens in Ireland.  At the setting of the sun, or at any other time of the day, the Dolmen can make for a real panoramic photograph.  The region where it lies, the Burren,  has a vast reservoir of historical remains and structures, with 70 tombs and nearly 500 forts. The sheer quantity of megalithic tombs and forts in the area is a sure sign of the Burrens importance during the Celtic era.

These Dolmens are nearly always situated in places of outstanding natural beauty. In Armagh, you have the stunning background of Slieve Gullion Mountain.

A suitable time to visit a Dolmen and experience their full magnificence is when the sun is setting or rising.  The orange glow of the sun as it shines its rays down through the eyes and heart of the Dolmen is a breathtaking sight to behold.
At Ballykeel Dolmen and other tombs around the locality, a visitor can witness Slieve Gullion slowly beginning to eat the last dying rays of the sun, until the dusk and darkness of the night begins to tighten its grip.  And what a darkness of the night it must have been for the Celts with packs of wild hungry Wolves roaming throughout the countryside seeking to tear someone limb from limb.
The howls of these fearsome animals in the dead of the night must have pierced the hearts of the Celts. Not only had the Celts to contend with Wolves, they also had to keep an eye out for other rival tribes, who would have stalked the night waiting for a chance to slit a rival tribesman’s throat.
It’s no wonder that when it comes to the “modern man” that one of the most common dreams we all experience is where we are getting chased. These dreams are a fingerprint on our DNA, a fingerprint of a bygone era where all sorts of ghouls and bloodthirsty animals chased us.
Just like how our bodies have evolved over the centuries, so have our minds.  The well known “fight or flight” phenomenon goes back to this evolutionary past. For our ancestors, this fight or flight phenomenon was very real.  Run and maybe you live. Fight and maybe you die. Sit still and do nothing and die for sure.Our genetic heritage demands that we do something.
Nowadays, for the most part, we no longer have to run and fight to survive  but still this etching, this imprint on our DNA lives on. The practicality, the usefulness, of this evolutionary byproduct is questionable to say the least but yet, we can’t get away from it.
Overall, I think its safe to say that these Portal Dolmens, these relics of a bygone age, have not only left a lasting imprint on our landscape but the people who inhabited them, have left a lasting imprint on our DNA.
This article was compiled by local SEO blog content writer Seamus Hanratty. Local SEO in Ireland is great way to grow traffic and help build local SEO traffic.