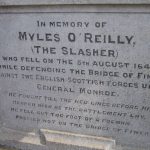 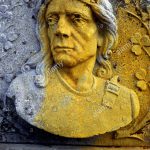 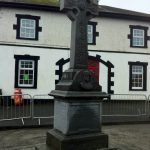 Ireland is an ancient land that is soaked with the blood of men who have fought and died in her many battles. One man who stands amongst the pantheon of Ireland’s great fighters is a man by the name of Myles Slasher O Reilly. In 1646 O Reilly died whilst putting up an heroic defence of a bridge against English and Scottish forces at Finea Co Westmeath. Slashers heroism that day was so great that it echoed down through the ages culminating in a memorial Celtic Cross being unveiled by the Lord Mayor of Dublin in 1913. The main inscription written upon the cross gives a bone chilling account of Slashers bravery on the faithful day where he passed into history and into the arms of Erins Patriot dead.

“The Slasher had with him 100 horse while the enemy was 1,000 strong. They fought them the whole day long untill his followers were nearly all slain. Finally he was encountered by a gigantic Scotsman who trust the point of his sword through the Slasher’s cheek. The latter closed his jaw on the blade and held it as if in an iron vice while he slew his antagonist cutting him through steel helmet down to his chin with one blow, both falling together. At that moment reinforcements arrived from Granard and the Bridge was saved. A further inscription reads “In memory of Myles O’Reilly, (The Slasher) who fell on the Bridge of Finea while defending against the English and Scottish forces under General Monroe on the 5th August 1646.”

Such a dramatic story is one that undoubtedly touches the heart strings- its a story that has everything: Drama, courage, and heroism against seemingly insurmountable odds. But the big question is whether the story is true or not? And when one digs into the historical annals question marks begin to emerge about whether Slasher died at the battle or not.

One Historian believes he has evidence that Reilly married a woman by the name of Catherine and then proceeded to have three sons with her. Other evidence points to O Reillys three sons being alive in 1717 which further adds to the evidence to the theory that he didn’t die at the Battle of Finea.

Other stories abound which allege that Myles escaped to France but it seems that this story has confused him with his cousin Colonel Myles O Reilly who did emigrate to France dieing there in a Monastery a number of years after the Battle of Finea.  Other evidence appears to suggest that on the night before the battle Myles slept at Nogent Castle overlooking Lough Sheelin in County Cavan and then returned there after the battle having his wounds attended to.

I think we prefer the initial story where Myles clamps down on the Scotsmans Sword with his Jaw and then slays the giant. Whatever the truth about the matter one thing is certain, and this is that a military engagement did occur at the Bridge and that Myles played a significant part in repulsing Opposition Forces. We may never know the full story, but the fact that Slashers actions have entered into local and national folklore is a clear sign that the man demonstrated incredible amounts of courage on the day of the battle. And whether Myles Slasher O Reilly died in 1646 at the Battle of Finea one thing is for sure his memory lives on.