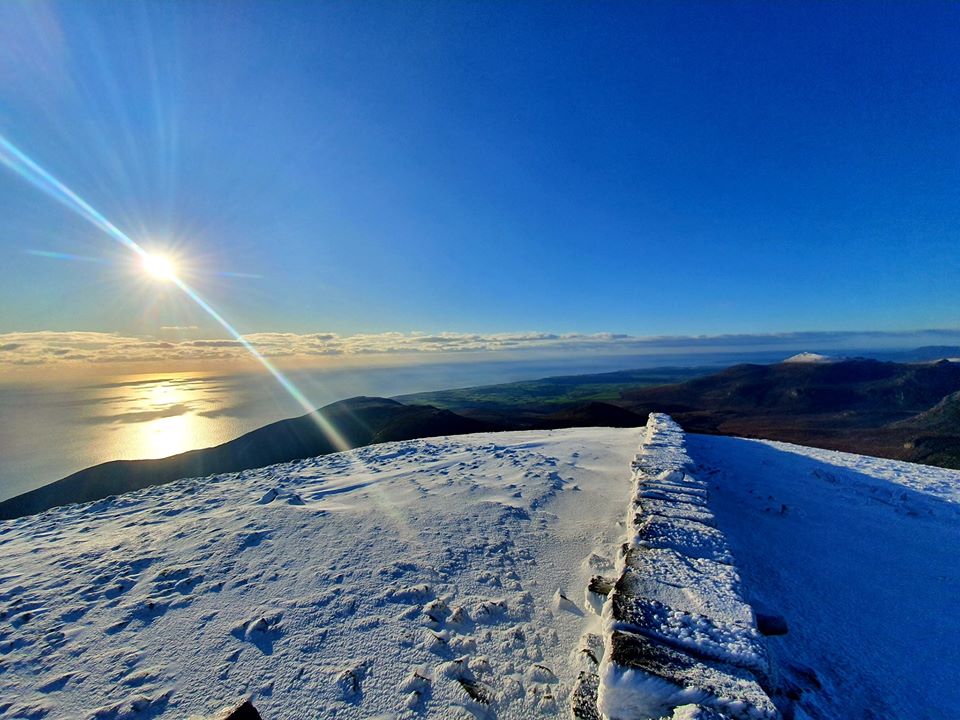 As you drive across the Mourne Mountains towards Newcastle Co Down your mind can sense that something special is about to unfold. Nearly everywhere you look a spectacular mountain pops up from the earth’s crust beneath the background of a clear blue sky. A jet darting across the sky gives the impression of a shooting star, a shooting star promising omens of a glorious day.A journey through these hills is a bit like going for a 5 course meal in some Michelin Star Restaurant where the starters are just mouthwateringly delicious. Awakening every sense and taste bud of your body. You’re left flabbergasted with each new dish that is placed before your eyes. The next dish couldn’t be any better than the last, it couldn’t, could it?? But it always is.

As you travel into the heart of these hills the suspense is slowly built up, and then bang. The waiter removes the cover from the last bit of food and there she is- the main course itself, Slieve Donard standing in all her majestic glory. The mountain is a masterpiece of nature carved out of the rock, granite, volcano, and sea ice. It dominates the surrounding landscape for miles around. At the bottom of the main street in Newcastle, she stands there with her chest puffed out rising magnificently into the heavens.  Make no mistake about it, Slieve Donard sits on the throne of Newcastle Co Down.

There are numerous ways in which to start your trial up the mountain but the one I took is the most one which is via parking at Slieve Donard carpark and making your way to the trail which starts at the end of the park.  The initial trail up the mountainside is an enclosed rocky pathway that in many ways resembles an 18th-century cobbled street. After a few minutes of hiking you come across the ominous-sounding bloody bridge which has a lovely waterfall running down between it. The Bloody Bride is a place where a massacre was said to have taken place during a rebellion that occurred in 1641. One real noticeable feature during the first phase of your hike is that of waterfalls rushing down the side of the mountain. These waterfalls provide a hypnotic and soothing sound.

Once you clear the forest you’re then out in the open and there before you stands Slieve Donard standing at 2790 feet and Slieve Commedagh standing at 2,516 feet. As you make your way up towards these mountains, in the distance, small flashes of silver catch your eyes. For the first time hiker, you might be forgiven for mistaking these flashes for a motherload of silver or gold but upon closer inspection, you realize that these flashes are small trickles of water flowing down the mountainside.

Isn’t it amazing to think how these small little trickles of water will morph into streams, slowly growing momentum, slowly gathering pace, then bit by bit all of these streams will join in union to create a river and then this river will expand into a raging torrent that can cut through rock and spread out throughout the countryside like the life-giving arteries of the human body?   In total, the Mournes gives birth to 19 separate rivers, most notably, the River Bann and the River Lagan.  It’s remarkable to think that these mighty rivers humble origins all began with a single trickle of water flowing down the Mourne Mountains.

Local legend has it that the Mourne Mountains was the place where Saint Patrick banished the snakes from Ireland. There is also said to be a stream located in the Mournes known as Saint Patricks stream where the legendary Saint was said to have knelt down and drank some water. Legend has it that when Saint Patrick’s hand touched a rock on the stream that to this day his handprint can be seen upon this rock.

When you hike your way up between the Slieve Donard and Commedagh the first thing that catches your eye is the Mourne Wall. The immense and powerful Wall was built between 1904 and 1922 using local granite and which was hauled up to the top of the mountains. The wall which runs for 22 miles encompasses 15 summits and includes the biggest mountain of them all Slieve Donard. Its awe-inspiring thinking of the sheer audacity and iron will of the men who set out to accomplish the task of hauling masses of granite up a mountain, thousands of feet into the air, and then to build a wall which stretches across the 15 highest mountains in Ulster.

When you stand at the wall and look to the other side of it the views are simply breathtaking.  It’s almost like you’re stepping foot inside one of Van Goghs or Michangeloes masterpieces only these masterpieces are second rate garbage compared to the reality that mother nature has put in front of you.  It’s not surprising that they have filmed  TV shows like Game of Thrones show on these slopes as  hiking the mournes is like stepping foot inside your own real-life fairytale.

When you’re standing at the wall and peering up at the summit of Slieve Donard it does seem like the peak could be reached in only 5 or 10 minutes but this illusion is very deceiving because the last end of the trek to top of the summit is very steep and if you’re not prepared it will have you tested to the last.

But the hike up this last section provides you with one spectacular view after another. Just when you think that you’ve seen it all another revelation is at hand. A previously undiscovered snow-covered peak catches your eye. A ray of sun blasting its way through a pit of blackness in the sky becomes almost like a message from god himself. A sudden breath of a wind clearing away all the clouds, and nature, like a  master magician, reveals another trick to a stunned audience. Words can never do it justice. If there is a god she is up here amongst the hills. This is my chapel. My church. I kneel at the alter of the nature’s craftsmanship. 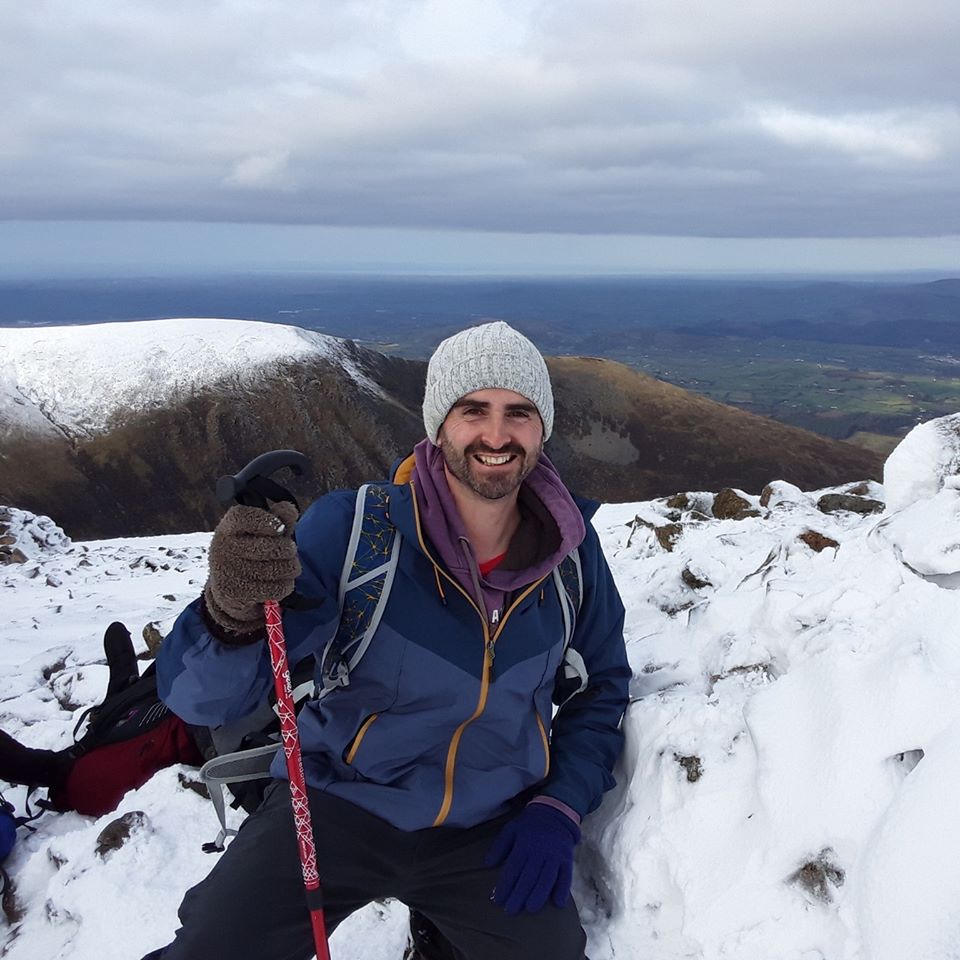 When you finally reach the top of Slieve Donard You can’t but help smile. You’re at the very top of Ulster.  Of the 2 million people in Ulster not a single soul is standing higher. At the summit, in the distance, you can see the Isle of Man, Snowdonia Mountains in Wales, and the Lake District. Masses of green and golden fields populate the horizon. To the east there’s Dundrum Bay which stretches all the way to Saint Johns Point. There’s several miles of beach that reaches all the way into a seemingly limitless horizon. On a good day the yellow cranes from the Harland and Wolfe Dockyards in Belfast can be seen.

This is the ancient province of Ulster shaped by men like:  Cuchulainn, Finn McCool, Henry Joy McCracken, Owen Roe O Neill, Hugh O Donnell, Edward Carson, Ian Paisley, Bobby Sands, George Best, and the list goes on and on. This land has borne witness to some of the momentous and tragic moments in Irish History. In 1798 Belfast born Presbyterian Henry Joy McCracken and a dozen or so other protestants set up the group called the United Irishmen a group that pledged to end English rule over Ireland by any means possible. Their motto was to “unite Catholic, Protestant, and dissenter. ” Predictably, the 1798 rebellion ended in disaster with McCracken meeting his doom at the end of a hangman’s noose. These days the Mourne Mountains unites people from all creeds, orange and green united in our love of the great outdoors.

As you descend from the mountain you will be afforded more time to soak in some of the sites you may have overlooked on the way up. Depending on how fast you’re going you should reach sea level within the hour. When you come down from the mountain your mind is swimming with endorphins. A creamy pint of Guinness is the cherry on top of the large cake that you’ve been consuming all day. The first gulp of the Guinness is a thing of bliss as it flows down your welcoming throat. Conversations flow free and easy.

The town itself, Newcastle, is a town that has something for everyone. Amusement parks, water parks, the seashore, restaurants, bars. At the end of the town stands the impressive gothic-looking Slieve Donard Hotel. For anyone who likes a bit of golf they can always decide to go for a round of Golf in the famous local golf course, the Royal County Down, which has hosted tournaments as prestigious as the British Open and the Irish Open. Four time major winner Rory Mcilroy counts the course as his most favorite course in the whole world.

But Newcastle in spite of its stunning surroundings is a town that has been on the receiving end of its fair share of tragedies. In 1843 a  fleet of local fishing ships sank resulting in 73 men reaching a watery grave. References to the tragedy at the time stated that, “Newcastle town is one long street entirely stripped of men.” One of the most famous residents of Newcastle is a man called Harry Ferguson, who in 1910 became one of the first Irishmen to fly an engine-powered plane. Newspaper reports at the time stated that “He flew a distance of almost three miles along the foreshore at a low altitude varying between fifty and five hundred feet.” His solo Plane ride is commemorated with a large plaque which is located along the Newcastle shoreline.

But all of this is a secondary aftershow to the main course itself, Slieve Donard. She stands there, proud, defiant, unbroken, enduring. A symbol of strength and power.  She stood here a thousand years ago and will stand here a thousand years into the future when we’re all dead and gone.  And us mere mortals,  temporarily full of life, full of delusional self-importance will register not even a flicker in the great passage of time.  The Mourne Mountains rekindles your spirt, revitalizes your heart. Redemption is poured amongst these treasured hills and Slieve Donard, for me anyways, is the ultimate Jewel in the crown.