Skip to content
Last month marked the 700th anniversary of the death of one of the most extraordinary characters in Ireland’s long and bloodied history- the death of Edward de Bruce, the Scotsman who crowned himself High King Of Ireland. De Bruce died at the Battle of Faughart on the 14th of October 1318.
The date was marked with very little fanfare in the County Louth location where De Bruce perished. But there was a wreath sent over from Scotland which was placed on the grave by the extended de Bruce clan. So what was this incredible saga all about? And how was he really killed?
Edwards more famous brother Robert had beaten the English at the battle of Bannockburn and he had hoped to open up a new front against the English by inspiring a Scottish led uprising with their Celtic cousins in Ireland.  So on the 26th of May  1315, Edward landed on the shores of Ireland with a Scottish force of about 5,000 men to try and drive the English out.
Initially, Edward’s army secured a number a number of notable victories but as time advanced his army became ravaged by famine and starvation. Another factor that played against de Bruces was the sheer brutality of the Scottish army, a brutality that ultimately turned much of the local population against them.
The English Army was initially caught on the back-foot by the invasion force but they then began to organize a force in an attempt to push back against the Scottish led rebellion.
On the 14th of October 1318 an English led force commanded by John De Birmingham set out to finally crush de Bruce once and for all. Edward who was stationed around Faughart upon hearing notice of the approaching army appeared to be cocksure of certain victory but history would ultimately tell a different story as he was cut down during the battle.
Reports vary as to how he was killed with some suggesting that the headstrong commander was killed due to his hot-headedness and over-eagerness to beat the English but other more recent evidence suggests that de Bruce was killed in almost comical fashion.
The end 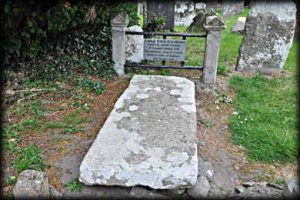 In 1845 local historian Bryan Geraghty compiled an account on the battle which was published in a County Louth Archaeological Journal. Geraghtys account was taken from a manuscript that was written shortly after the battle so it must carry some weight when it comes to finding out what actually happened on the day. Geraghtys account goes like this,
“after the initial battle when Bruce’s men were in high spirits because they were certain of victory, the different divisions of the army set down to take food at the request of the King and his noblemen, so that they might be refreshed to finish the battle with success, rout the Galls (English) to their fortresses. At their meal which they were enjoying with good zest, the King walked alone to explore among his people who lay dead on the hill, and view the gory carnage of the morning of that day.
He was not long engaged in this manner when they, his men, perceived a shameless idiot (later named as John De Maupas, a burgher of Dundalk) enveloped in a bundle of straw ropes, instead of clothing, wending his way towards the King across the hill. All were disgusted and astonished at seeing such a figure approach the King, but supposed that message impelled him to come there, and that a sense of fear was not in his heart for they conjectured, and their conjections were well founded, that he came towards the King from the camp of the Galls”.
“When this demented person came before the King, he saluted him, and the King returned the salution in like manner. This demented fellow held in his hand an iron ball to which a long chain was attached on one end of which was tied round his waist and there displayed many frantic and very trifling tricks.”
“When this madman presented himself before the King and said ‘ O Gentleman I am a professor of arts, who have excelled all other professors of arts in Ireland and since I am determined to display my achievements before the King in order to obtain wealth and the honour of knighthood from him, and since I suppose you to be the King of Ireland’s people I find it necessary to display my feats before you if you wish to view them’.
“I do” the King replied smiling “what feats do you perform ?”.
“I perform the feats of the iron ball” said he.
“Well then” said the King “perform your feats for me and I myself will introduce you to the King”.
“The frantic fellow thereupon began to play his uninteresting feats, until finding an opportunity of the King, he gave him a stroke of the ball on the head by which he scattered his brains around. After this act he ran as fast as he could across the side of the hill in the direction from which he came”.
When his people saw the King fall close by them, they raised piercing and most sorrowful cries of lementation, and armed and unarmed as they were, pursed the treacherous and accursed idiot who committed the great act of destruction and though they were swift couriers, and active and nimble-footed kearns among them, it was not in their power by the speed of running and nimbleness of nerve to overtake the iron fool until he took refuge among the Galls”.
“persons worthy of credit who have been intimate with the King assert that he was an upright pious man, on whose heart the fear of God and the love of man was deeply impressed-that he held injustice and treachery in utmost destestation- that he was a valiant hero, sensible and affable, and friendly towards his subjects-and he was a learned man well skilled in the various languages of Europe, acquainted with the liberal sciences, but proud of the truly royal blood from which he sprung”,
“Those who survived returned the same night after the Galls retired from the field of battle and carried the body of the King along with them to the house of a gentleman of the family of O’Roddy, who resided on the Hill of Fochart, where a wake and funeral was held over it, and it was interred with great honours by O’Roddy and his people in his own family burial ground in the country of Fochart of Saint Bridget and they set a coarse unhewn mountain stone over the grave to distinguish it as that of the King of Ireland”.
And to this day Edward de Bruce’s body, or what remains of it, lies buried on top of a windswept hill in Faughart Co Louth.
Check out these other services:
Legal content writer
Legal content writer
Legal content writer
Hire SEO copywriter
SEO Cork
SEO Cork