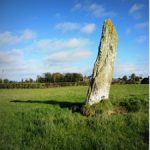 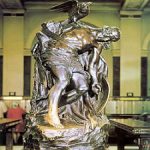 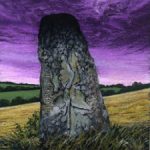 In KnockBridge Co Louth there is a standing stone that is synonymous with Irish History, myth, and legend. A stone that is etched into the Irish conciousness, so much so, that a bronze copy of this very stone lies in one of the most recognizable and famous buildings in ireland, the GPO in Dublin. The stone that I’m talking about is Cuchulainn’s stone, where according to ancient Irish folklore, Cuchulainn was mortally wounded in a battle when he was fighting Queen Maeves Army of Connaught and in one last defiant act he tied himself to the stone so that he could die standing up and facing his enemies. His fearsome reputation was so great that even though he was mortally wounded none of his enemies would approach him until a Raven landed on his shoulder because only then did they know for sure that the legendary warrior was dead.

To get to the location you have to jump across a fence and then walk across a potato field where the huge rock points out of the ground like a giant finger.The official name is the Clochafarmore standing stone and it rises to 3 meters in height(10 feet) and is 1.3meters wide. By any stretch of the imagination its  an unusual looking place for such a structure to reside and whether it was placed there or was a natural feature of the landscape is hard to know.

The area would have been a place of significance for the Celts where they would have danced and paid homage to various gods and spirits of that era.  Standing beside the large stone there is an unmistakable sense of history about the place and its not too hard to imagine our celtic forefathers gathering at this location dancing, singing, and perhaps even sacrificing a clan member to their gods.

There are few heroes more mythologised in Irish Folklore than the great Cuchulainn and because of his mythic heroism as I’ve previously touched upon there is a iconic bronze statute erected in the GPO where Cuchulainn is fastened to the very rock in Knockbridge. Its amazing to think that the origins of a story which Yeats, De Valera, Pearse, and many others have spoken in awe about had its beginnings in a small County Louth village called Knockbridge.