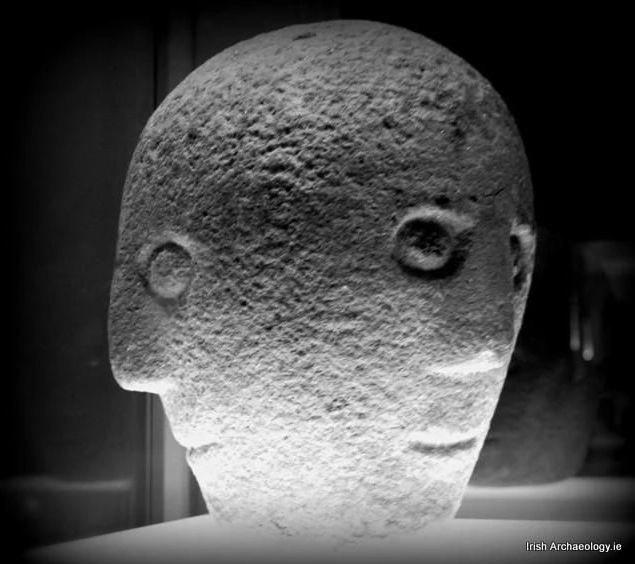 In 1885 a farmer working the fields stumbled across a bizarre three faced head in Drumeague in East Cavan. Also known as the tricephalic head the find proved to be one of the important ever in Irish archaeological history. Upon closer examination experts discovered that the head had a hole on its underside which suggested that it was placed on a pike or a pillar during some ancient Celtic ritual. The Celts worshipped heads believing that they encompassed the entire human spirit. It is thought that this particular three faced head was meant to represent Lug the Celtic creator, Dagda the preserver and Ogma the destroyer, a trinity of spirits in many ways very similar to the Christian trinity of the father, the son, and the holy ghost.
When the site was excavated other strange and unworldly artefacts where uncovered including a stone with a Rams head on one end and a bearded man at the other. It was believed that the area used to be some kind of stone age passage tomb where various rituals would have been performed before the dead would have been placed inside the tomb and then moved on into the spiritual realm.  Much of the evidence also points to the ancient Celtic practice of human sacrifice.
Similar finds have also taken place around Holy Wells which suggest that the Celtic revered some of these sites for the simple reason that they provided the life blood of water. Local folklore around many of these locations suggest that they are places of many supernatural happenings with fairies, leprechauns, and ghouls of all sorts making appearances in the dead of the night.  At a similar Holy Well in Northumberland in England experts discovered a severed head at the bottom of it which gives clear indication that places like these where used for human sacrifice.
All of the finds that where discovered in East Cavan back in 1885 are now preserved at the National Museum Ireland and are known as the Drumeague Pantheon Collection. Entry to the National Museum is free and hopefully anyone visiting the collection wont be left with a case of head not on shoulders.